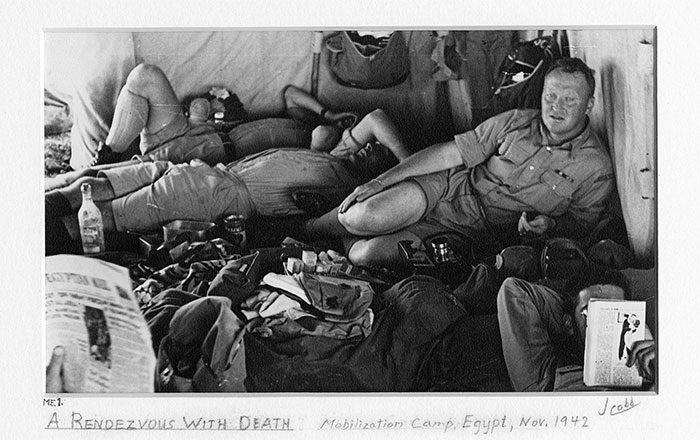 Photo: John C. Cobb, courtesy AFS Archives, NY.
Our first day ashore, we were worried about the battle at El Alamein. We had been told, as we sailed up the Red Sea in the HMT [His Majesty's Transport] Aquitania with 7000 U.S. troops, that the Battle of El Alamein was in progress, and the German Army was threatening Cairo. The rumor was: "Our destination, Port Tufig, is in flames!" (Not true). We were not allowed out on deck without a tin hat, but these had not yet been issued to us. In this photo, Dick Stockton (facing the camera with a worried look) was a section leader. He was later killed in action. Charlie Pierce (behind the magazine) later became an officer of our C Platoon. John Barhydt is reading about the on-going Battle of El Alamein in The Egyptian Mail. We didn’t know then that this battle would be a victory for Montgomery’s Eighth Army and a turning point for the Allies. Location: El Tahag Mobilization Camp, Egypt.
More in this category: « Arthur J. Putnam (left) with an unknown United States Army Ambulance Service driver. "It Never Rains in the Desert" ...Major Shaffer »