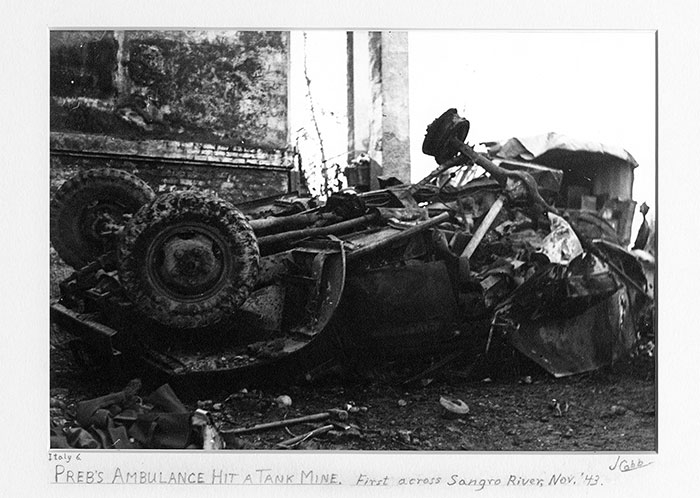 Photo: John C. Cobb, courtesy AFS Archives, NY.
Location: At the First Crossing of the Sangro R. [River].
"PREB" Poem by "Fox" Edwards, In Memory of Vernon W. Preble They wrapped him in an American flag And stuck a wooden cross in the soft ground at his head. It was his last slit trench. "I guess I won’t drink any beer for a while" was all he said when they pulled his burned body free. The fire had scorched his eyes his face his hands and body. Pinned down In the torn and mangled ambulance, trapped, he fought clear of the flames in the sickening seconds after the roar of the bursting mine. It was a brave fight for life. He lived four days more. They found him beside his ambulance that the mine had burned and killed. An ambulance in war Is part of those who live in it, drive it over steep hills and through rivers where shells are dropping. It is like a live thing helping wounded men, and where men who can not be saved sometimes die. His ambulance would not go on without him. They picked him up from beside the charred wheel that he had held at Mareth, Enfidaville, the Sangro River. His life meant many lives saved. We loved him for his tousled boyishness, and because of the times he made us laugh when laughing was hard. It took guts to say "Guess I won’t drink any more beer…"
More in this category: « Letters Home, by a Single Candle "Preb" at Breakfast Time »