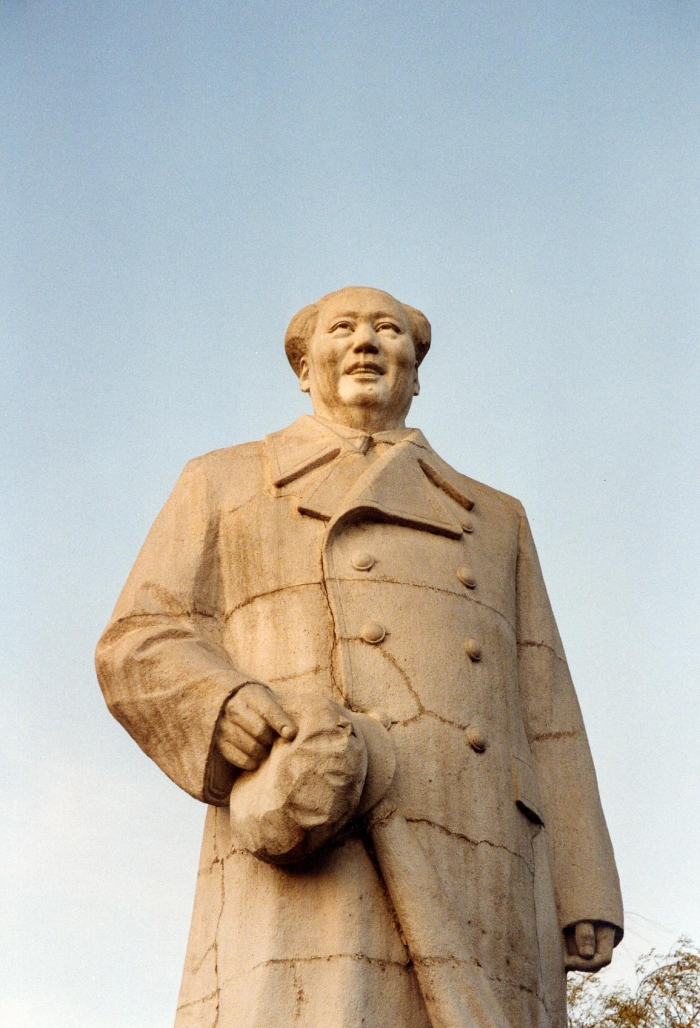 Shortly after my arrival, I purchased a second-hand bicycle, which cost two hundred and fifty Renminbi, equivalent to two months' wages for many Chinese. A brand new one, made by Flying Pigeon & Co. -the largest manufacturer in the country- cost three times as much. In the mid 80's, everybody in China wanted a bicycle and, a few years before, it was a watch also worth two months' wages. My newly purchased bicycle became my preferred mode of transport until, one day, it disappeared. I then resorted to public transport, buses mostly as the underground only had one line.
In those days, the city was blessed with no traffic-jams but plagued with hordes of bicycles everywhere, all of them black. They had no lights at night, and I often wondered why. I asked Teacher Hu one day. "Mao said that China was more enlightened than Russia; so the Chinese don't need lights on their bikes." I tried terribly hard to remain serious. Apparently, that statement was made at the time of tensions between the two countries but still applied, it seemed. The quality of Chinese bicycles was not the greatest and repair stalls were a familiar sight at street corners. Flat tyres were part of daily life and another big hazard, when you rode a bicycle, was spitting. It was a nasty habit still quite common despite government efforts as, traditionally, the Chinese believe that getting rid of your phlegm is healthy for the body. Once, I was pedalling along, alert to the preceding clearing of the throat and managed to duck just in time. Unfortunately, the "other Anne" was on the same flight path and the resulting swearing was another proof of her proficiency in Chinese...One blessing owed to bicycles was the lack of pollution, compared to Western cities, and we often enjoyed clear blue skies.
Beijing was a very spread out city and cabs were few and far between, however buses were a cheap way to get you across town. I got to know the route of Bus Number One, an old and squeaky one, rusty on the outside. It had two articulated carriages and moved like a caterpillar along the main roads of Beijing. Sometimes Bus Number One was so full that children were carried through the windows. Every time I boarded the bus, I felt intimidated by the high pitch and nasal voice of the bus conductor squealing "Mai Piao, Mai Piao", "buy ticket, buy ticket". Bus conductors looked and acted as if they owned and ran the city, a bit like waiters in Parisian cafés. They could be bad-tempered so you made sure to buy a ticket as soon as you got on. At least two stops before my destination, I would squeeze my way to the door and shout "Wo xia, wo xia..." "I'm getting off...".
In Beijing, we normally could find cabs in front of the few Western-style hotels. All were incredibly clean and drivers wore white gloves. Besides the prohibitive cost, the additional challenge was to tell the driver your destination in Mandarin. A few days after my arrival in Beijing, I opted for the luxury of a cab after dinner with American friends in the downtown area. Once inside the cab, my mind went completely blank and I couldn't remember the name of my college in Chinese. It was pitch black outside and my hands started to sweat. "Deng yi xia" "Wait a moment", I told the driver, a convenient phrase I often used to buy time. Suddenly, with a rush of adrenaline, the name came back. "Beijing Shi Fan Xue Yuan" (Beijing Teachers' Training College), I burst out and then sighed with great relief. I couldn't even think how to say "please take me to the British Embassy or the French one, let alone the Police Station". Fortunately, this driver knew where my college was.

More in this category: « Settling in Beijing Keeping Warm »