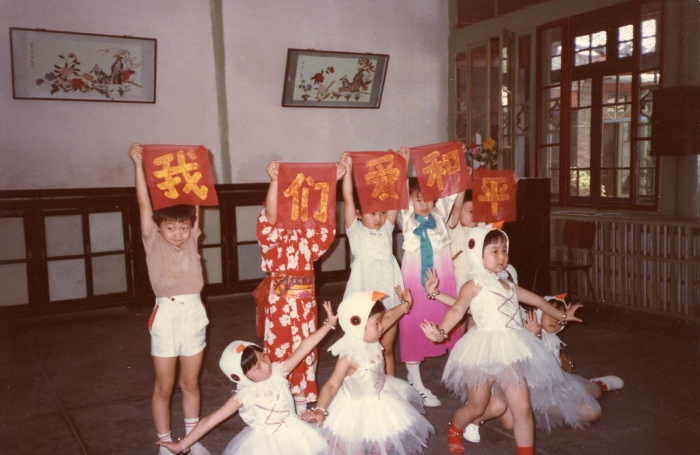 Photo: Anne Depaulis Translation of the Chinese characters: “We like peace”.

“FROM REDNECKS TO RED CHINA” is a collection of anecdotes related to my stay in Beijing in 1986, which I started to write in the late 90’s. I was fortunate enough to be part of a brand new AFS programme with China, sixteen years after my year in high-school in Texas. I was living in London at the time and my British passport proved very useful as I was empowered by AFS UK to represent the best of the kingdom in the Middle Kingdom.

It was exciting to be in China then, as the country was just opening up and, for the first time in many years since communism, it was easy to make contact with the locals. I was invited to a lot of homes to share meals and even to spend the week-end, a couple of times. The little they had at the time, they were happy to share and had no shame to show how poor they were, always with great dignity.

When I arrived in China, I was pretty well prepared for a new intercultural experience. I had read a few useful books but, mostly, it was that year in Texas that definitely prepared me for adjustments I would have to make in my life thereafter. However, the new component was to move from London to Beijing and not from France. Who am I? I wondered at times. To add to my state of confusion, most Chinese thought I was American since I had blue eyes.

It is extremely hard if not impossible to quantify what we gain out of an intercultural experience. To me, when I look back over the years, it has been the most valuable and enjoyable part of my life. It definitely added spice and interest to my banking life to deal with a great diversity of cultures and travel a lot. Mostly, other cultures have inspired me in my attitude to life. The Chinese are amazingly adaptable, resilient and move forward rather than feel sorry for themselves. I do my best to be Chinese at times. Their sense of hospitality is beyond what I have experienced anywhere else in the world and I try to remember that too. Naturally, there are cultural differences that we don’t like or disapprove of but, in the end, it is getting to know an individual that matters. We are all a mix of cultural, social, genetic components and yet are all unique and interesting. The recipe for intercultural success is a fine balance between absorbing a new culture, keeping your own and respect differences, not always an easy task. Fundamental values such as integrity, generosity, loyalty, respect, understanding, kindness etc…are universal so, in the end, we are all pretty much the same deep down inside. These values are the ones we should fight for to establish peace and order wherever we are.

I came back very positive about China’s future but never suspected it would change as much as it has and so rapidly. Eventually, in my banking career I worked for the Bank of China and they gave me an official name in Chinese for my business card. I then became “Di Anna” from just being “Anna” when I was a student. “Di” is a Chinese family name and resembles the first syllable of my own family name which, in fact, is Italian and not French …. The Chinese love the sound of it and, at the time, made the connection with Princess Di.

Today I feel Chinese, tomorrow perhaps British and next week, French or Italian since I have some Italian blood after all. One day, a Swiss friend said very seriously “this must be your Swiss German side”. I felt honoured and, yes, I lived in Switzerland too at some point to add to total confusion.

P. S. March 2015 - Meanwhile the book has been published and is available as paperback and Kindle version.

More in this category: « The Chinese and The French