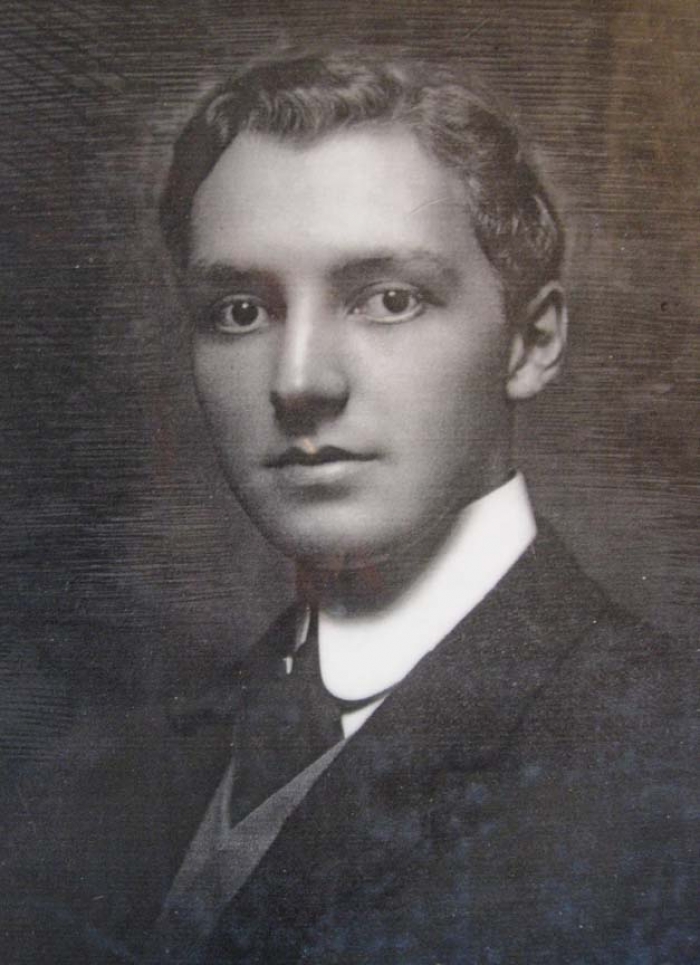 Henry Davis Sleeper, the youngest of three sons of Major Jacob Henry Sleeper and Maria (Westcott) Sleeper, was born at Boston, Massachusetts, on 27 March 1878, to a family of secure means. His father served with distinction in the Civil War, and his grandfather was one of the founders of Boston University. He is said to have been tutored at home on account of his frail health, and no trace of any formal education has been found. A tradition that he studied architecture at the École des Beaux-Arts in Paris is not supported by that institution's records; whether he studied elsewhere in Europe remains to be demonstrated.

In his early years he summered with his family at Marblehead. On 13 August 1907, he purchased the land on Eastern Point in Gloucester where Beauport stands. He began its construction in the fall of that year, occupied it by 12 May 1908 when Andrew was his first houseguest, and expanded it continuously until his death.

[On 17 August 1915,] Andrew embarked for the United States on a month's visit. At stake was the prospect of independent funding for his nascent ambulance service, and its eventual liberation from the control of the American Hospital in Paris. Instrumental in the eventual accomplishment of both objectives, Sleeper assumed full responsibility for raising funds in the United States, and began a voluminous stenographic correspondence. These letters, together with many of Andrew's replies, are preserved in the archives of the American Field Service, and are central to its early history.

But Andrew saw something that no one at that time could visualize. He saw Americans sharing hardships, danger, mixing with the soldiers at the front. He knew what a link that would be between America and France. He would not be rebuffed, and found his way to French Headquarters, where he had a friend, Gabriel Puaux. He pleaded with him of the great morale effect of having these Americans at the front and finally got permission to go to Commandant de Montravel, then stationed in the east. Here again he had to use the force of his argument that he wasn't interested simply in getting a few men at the front, but that its importance lay in that it would attract more and more American youths to come to France. He won his point, and the Service aux Armées de l'Ambulance Américaine became a reality.

"And in early 1915, with this settled, funds had to be gotten, so he went about it in his direct way---got on a steamer and went to Harry Sleeper and imbued him, a willing friend, with his vision of what America could do---so much so that Harry dedicated his life for those years to a magnificent accomplishment of financial and recruiting organization.

Steve Galatti, quoted in George Rock, "Between the Wars", History of the American Field Service, 1920-1955.

You will have got by now a notice of the work I have been at day & night this past week -- organizing the lecture Jack [Hammond] is to give -- getting all the patronesses -- & selling 125 tickets at $3.00 each, before these notices were even posted!

Yr. mother gave $100.00 & C.B. [Cecilia Beaux] the same (bless them!) & Mrs. Patch has guaranteed the same amount giving $50.00 outright. C.S.S. [Caroline Sidney Sinkler] I hope will do something nice -- & so will several others. If Jack's lecture is over-subscribed within a few days I will arrange for a repetition. He can only seat 200 -- so you will doubtless receive the $1,100 by cable before this letter.

I thought it would please you , so have worked hard & shamelessly!

In May 1915 there were three sections of 20 ambulances each working on different sectors of the front in France under the direction of Colonel Andrew, Inspector General, and Stephen Galatti, Assistant Inspector. The U.S. representative was Henry Davis Sleeper, who conducted an office in Boston to solicit funds and volunteers. He was so successful that the American Field Service was operating 1,220 donated ambulances organized as 31 sections serving 66 French divisions when it was taken over by the U.S. Army in late 1917.

For the past nine months Mr. Sleeper has made Rue Raynouard his life. He has in truth become almost an inseparable part of it. He has made the management of the place his personal business. The trials and tribulations of those who have come here he has made his own too. If difficulties could be straightened out, Mr. Sleeper was the man who could straighten them.

You might not, at first, guess this, for Mr. Sleeper was very idle. You might find him at most hours of the day moving around with in the clubrooms, apparently with nothing more to do than the men with whom he was talking. But somehow if you mentioned to him some difficulty that you couldn't untangle he would tell you he'd look into it ; and probably the next noon would casually tell you that he had fixed it up, and if you ran along down there here you wouldn't have any more trouble. Where he got the time for all these things, nobody knows. But he got it. That is Mr. Sleeper's secret.

Since the large number of men have been staying at Rue Raynouard, Mr. Sleeper has continued his series of ever-new surprises. Little did you expect when you wandered in one night from the theatre to find the dining room thrown open, and an after-the-theatre feed spread out upon the tables --- the like of which might not be found elsewhere in Paris for love or money. So great a success was this innovation that Mr. Sleeper has since made it almost a regular institution. On April fifth he again outdid himself by arranging a dance --- another immense success. Perhaps on this night you wondered, along about twelve o'clock, how you were ever going to get that lady home. If you went upstairs to scan the supposedly empty street in hopes of seeing some belated bandit come chugging along, you found yourself facing a street-full of taxis. They had been corralled by Mr. Sleeper --- and no one to this day knows how he did it!

In the autumn of 1918, Sleeper went to Paris, where he became director of American Field Service headquarters at 21 Rue Raynouard in Passy. After the armistice, he remained in Paris to assist Andrew in reconstituting the Service as a scholarship program for the exchange of students between French and American universities. The two men returned in mid-1919 to Gloucester, where Andrew set about editing the official History of the American Field Service in France, published in three volumes the following year. To a reticent but heartfelt Introduction describing his own contribution to the establishment of the Service, Sleeper prefixed another slightly-altered quotation from Emerson's "Friendship" (see Letter 46): "The root of the plant is not unsightly to science, though for chaplet and festoon we cut the stem short."

Sleeper's and Andrew's paths diverged widely after the war. Andrew reentered politics, and Sleeper became absorbed with his profession. Their correspondence was reduced to typewritten notes, pertaining mainly to the scholarship program, but there is no evidence that their neighborly relations were less cordial.

Sleeper's interest in the decorative arts was well established before World War 1. He served as Director of Museum of the Society for the Preservation of New England Antiquities (1911-13), and as a founding member and trustee of the Shirley-Eustis House Association (1913), and actively participated in the reconstruction of the Church of Our Lady of Good Voyage in Gloucester (1915). After the war, he embarked on a career as an interior designer and decorator. He maintained offices in Boston, describing his business as "English and French Interiors --- 17th and 18th Century American Paneling." He executed commissions for clients including F. Frazier Jelke, Henry Francis du Pont and R. T. Vanderbilt in the East, and in Hollywood, John Mack Brown and Fredric March. He served as a trustee of the Isabella Stewart Gardner Museum and a member of the Visiting Committee for Decorative Arts at the Boston Museum of Fine Arts, where his collection of Paul Revere silver is housed. Four months before his death, he was elected an honorary member of the American Institute of Architects, as a "collector of Americana and protector of the culture of early America."
Henry Sleeper died in Boston on 22 September 1914, at the age of fifty-six, and was buried in his family's plot at Mount Auburn Cemetery in Cambridge. He never married. After his death, Beauport was sold to Mrs. Charles E. F. McCann of New York, a daughter of F. W. Woolworth. It was given by her children in 1942 to the Society for the Preservation of New England Antiquities, which maintains it as a house museum today.

Isabella Gardner remained comparatively inconspicuous between the months after her return from Europe in 1906 and the breaking of the notorious customs affair in August, 1908. She was observed by Town Topics --- first decorously attending lectures on the "Art of Poetry" during Lent in 1907; then judging the dancing at the "All Fool's Day Festival" at the Women's Athletic Club for the benefit of the George Junior Republic. In December, she was in her box at the San Carlo Opera on opening night, the Bellamy Storers being her guests.

A new young man, Henry Davis Sleeper, wrote that Mrs. Gardner asked him to tea with the San Carlo Opera Company. The cast were "somewhat less interesting than cattle," he said. "They didn't sing" ---the only music being provided by Clayton Johns and Proctor, who "tried the piano." A lady from the opera company looked at her watch.

"I have an hour and three quarters yet," she said, "and I wish to have all these pictures explained to me." Sleeper was asked to show her around --- an assignment which rather floored him, although he had just embarked upon a career of interior decorator, his own Gloucester home to be the future "Beauport," a museum.

Other close friends included the New Haven lawyer George Dudley Seymour, and the young Harvard professor of economics A. Piatt Andrew, who started the summer colony in Gloucester where Beaux built her cottage "Green Alley." She was acquainted with scores, perhaps hundreds, of the socially and culturally prominent.

Sarah Burns. "Under the Skin: Reconsidering Cecilia Beaux and John Singer Sargent". The Pennsylvania Magazine of History and Biography, Volume CXXIV, No. 3 (July 2000)

As Tara Tappert has detailed, Beaux liked the company of men and enjoyed the attention they paid her. She cultivated other women's husbands, notably Richard Watson Gilder, hobnobbed with confirmed bachelors such as T. Alexander Harrison and George Dudley Seymour, and accepted the adoration of much younger men: A. Piatt Andrew, Henry Davis Sleeper, and -- probably her great love and greatest disappointment -- the illustrator Thornton Oakley (see Leibold fig. 5).

When Beaux was in her mid-fifties, she was courted by the New York businessman John Wilkie, who dubbed her the "Queen of Hearts." Beaux seems to have reveled in this "Queenly" role, never happier than when standing surrounded by "admiring eyes and bending over heads." Numerous photographs in the Beaux albums bear witness to the power of her charm. One is an interior at "Red Roof," A. Piatt Andrews's Gloucester summer home. Beaux sits in by the hearth in a Windsor chair, with four handsome young men grouped around her (fig. 6). In another photograph, she holds the ends of a bear leash attached to collars worn by A. Piatt Andrew and another young man, kneeling before her like trophies of the goddess's hunt (fig. 7).

Sarah Burns. "Under the Skin: Reconsidering Cecilia Beaux and John Singer Sargent". The Pennsylvania Magazine of History and Biography, Volume CXXIV, No. 3 (July 2000)

More in this category: Judy Bruckner on writing about her grandfather's WWI experience »