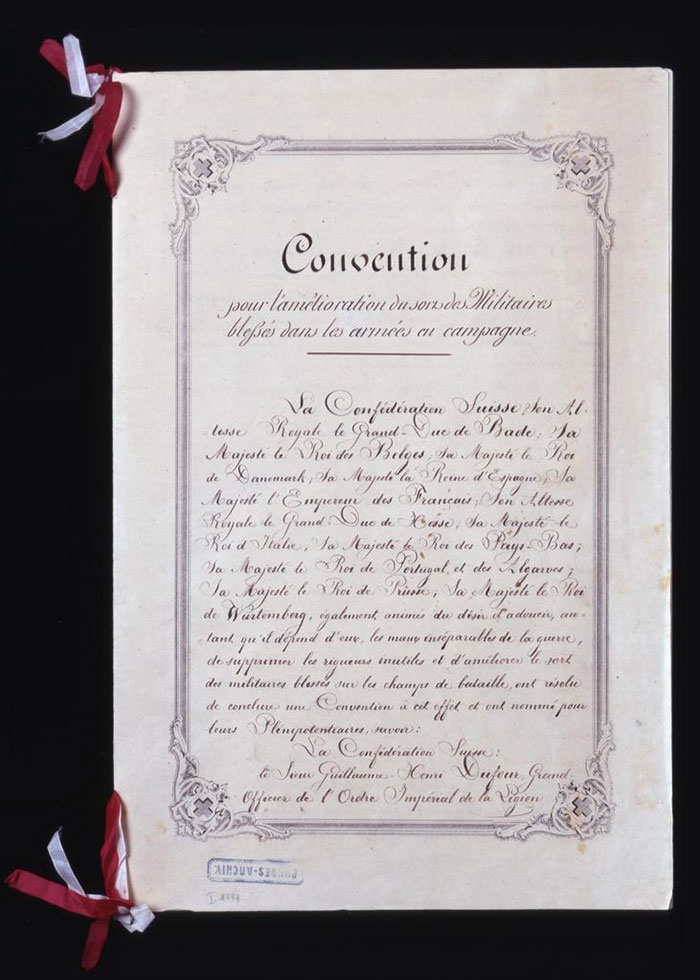 It was adopted on August 22, 1864 by an international conference attended by representatives of 16 states and is considered the birth date of International humanitarian law.

The United States ratified the 1864 Geneva Convention in 1882.

The Convention was updated and expanded in 1906, 1929 and 1949. The Geneva Conventions apply at times of war and armed conflict to government who have ratified its terms.

Following the English translation of the original text consisting of 10 articles:

Convention for the Amelioration of the Condition of the Wounded in Armies in
the Field. Geneva, 22 August 1864

Article 1. Ambulances and military hospitals shall be recognized as neutral, and as such, protected and respected by the belligerents as long as they accommodate wounded and sick.
Neutrality shall end if the said ambulances or hospitals should be held by a military force.

Art. 2. Hospital and ambulance personnel, including the quarter-master's staff, the medical, administrative and transport services, and the chaplains, shall have the benefit of the same neutrality when on duty, and while there remain any wounded to be brought in or assisted.

Art. 3. The persons designated in the preceding Article may, even after enemy occupation, continue to discharge their functions in the hospital or ambulance with which they serve, or may withdraw to rejoin the units to which they belong.
When in these circumstances they cease from their functions, such persons shall be delivered to the enemy outposts by the occupying forces.

Art. 4. The material of military hospitals being subject to the laws of war, the persons attached to such hospitals may take with them, on withdrawing, only the articles which are their own personal property.
Ambulances, on the contrary, under similar circumstances, shall retain their equipment.

Art. 5. Inhabitants of the country who bring help to the wounded shall be respected and shall remain free. Generals of the belligerent Powers shall make it their duty to notify the inhabitants of the appeal made to their humanity, and of the neutrality which humane conduct will confer.
The presence of any wounded combatant receiving shelter and care in a house shall ensure its protection. An inhabitant who has given shelter to the wounded shall be exempted from billeting and from a portion of such war contributions as may be levied.

Art. 6. Wounded or sick combatants, to whatever nation they may belong, shall be collected and cared for.
Commanders-in-Chief may hand over immediately to the enemy outposts enemy combatants wounded during an engagement, when circumstances allow and subject to the agreement of both parties.
Those who, after their recovery, are recognized as being unfit for further service, shall be repatriated.
The others may likewise be sent back, on condition that they shall not again, for the duration of hostilities, take up arms.
Evacuation parties, and the personnel conducting them, shall be considered as being absolutely neutral.

Art. 7. A distinctive and uniform flag shall be adopted for hospitals, ambulances and evacuation parties. It should in all circumstances be accompanied by the national flag.
An armlet may also be worn by personnel enjoying neutrality but its issue shall be left to the military authorities.
Both flag and armlet shall bear a red cross on a white ground.

Art. 8. The implementing of the present Convention shall be arranged by the Commanders-in-Chief of the belligerent armies following the instructions of their respective Governments and in accordance with the general principles set forth in this Convention.

Art. 9. The High Contracting Parties have agreed to communicate the present Convention with an invitation to accede thereto to Governments unable to appoint Plenipotentiaries to the International Conference at Geneva. The Protocol has accordingly been left open.

Art. 10. The present Convention shall be ratified and the ratifications exchanged at Berne, within the next four months, or sooner if possible.

In faith whereof, the respective Plenipotentiaries have signed the Convention and thereto affixed their seals.

Done at Geneva, this twenty-second day of August, in the year one thousand eight hundred and sixty-four