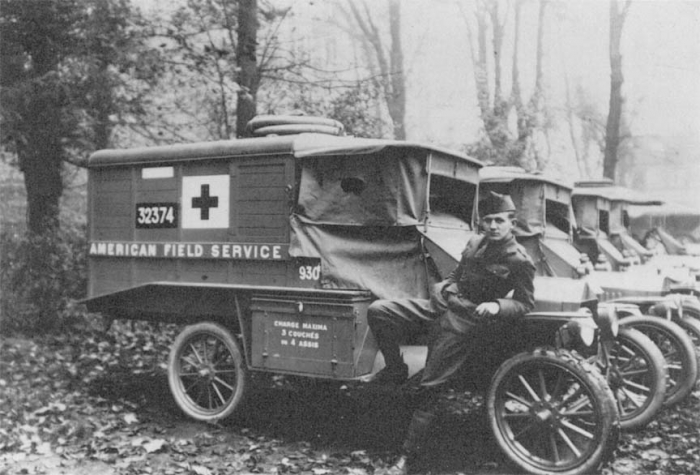 On June 11 SECTION SIXTY-FOUR left for the training-camp at May-en-Multien. On June 21, it took over a section of French cars at Mouy-Bury and left for Rupt-sur-Moselle, in Lorraine. After a stay there, en repos, of almost a month, it was transferred to Rougemont-le-Château, later going on to Vesoul, in the extreme east of France, in the Haute Saône, back of the Alsatian front. After nearly a month of evacuation work here, it convoyed down into Lorraine by way of Contrexéville and Neufchâteau, and finally at Condé-en-Barrois was attached to the 19th Division. On September 12 it went to Glorieux, near Verdun, handling wounded from the postes of the Carrière des Anglais, Vacherauville, and La Fourche. On October 2 it was en repos at Vanault-les-Dames, near Vitry-le-François, and on the 10th left for Génicourt. There, on October 26, a section of Fords relieved Sixty-Four, its Fiats were turned in to the French parc, and the men left to enter other services or be reassigned in the U.S.A. Ambulance Service.

'The Ambulance Sections', History of the American Field Service in France, "Friends of France" 1914-1917, Told by Its Members, Volume II (Boston and New York: Houghton and Mifflin Company, 1920)

You have become a forge of snow-white fire,
A crucible of molten steel, O France!
Your sons are stars who cluster to a dawn
And fade in light for you,
O glorious France!

Among ourselves, we used to call it the "Flying Sixty-Fourth," not because our cars had wings, but because we once hoped to be one of those mythical sections that hop around from offensive to offensive. In reality, we did not fly much, but we jumped a lot.

But before we can speak of Section Sixty-Four as such, we must make our start from the Yale Campus. Through the coöperation of some Yale men and the Yale News, sixty Yale men were enlisted in the American Field Service. They gathered in New York during the week of May 21, and, after some fine hospitality and a send-off from the Yale Club of New York, sailed on May 26.

We all enjoyed the voyage, the novelty of our first view of France, and of course, Paris. After a week of uniform-fittings, sight-seeing, and equipping, some of our unit entered the camion branch of the Service, but forty of us left for the ambulance camp at May-en-Multien, where we were drilled à la française. On the evening of June 20 our orders came, and we left the next morning under the leadership of Lloyd Kitchel. The complement of the Section of forty-five men was filled out with four men from Columbia and one from Syracuse University.

As an introduction to the discomforts of life in the ambulance service, our sojourn at Mouy-Bury boded much. Six days of sleeping in straw on the fourth floor in an old mill, with six hundred poilus beneath us; six days of --- well, perhaps they were intended as meals; six days of wading in mud---all these bothers were mitigated only by the fact that we had our cars. Here, too, Lieutenant Jacques Dumont and the French personnel joined us, and on June 26 we started off on our first convoy, headed in the general direction of the Vosges.

Our Jeffery cars, left-overs from a French ambulance section, behaved better than we anticipated, and after five days of a beautiful trip, fifteen of our cars --- we felt this a very fair percentage --rolled through the foothills of the Vosges and into Rupt-sur-Moselle, the headquarters of the Automobile Service of the Seventh Army. We celebrated the Fourth here, washed cars often and for no apparent reason, drilled more often, and on July 17 started away to Rougemont-le-Château.

Our arrival in Rougemont promised much, for French anti-aircraft guns were continually putting clouds in the sky in vain attempts to land a Boche. But this town provided only a little more work than Rupt.

Then on July 29 we left for Vesoul, where, on the night of our arrival, we did our first bit of real work by evacuating three hundred blessés from the station to the many hospitals of the city. Vesoul was indeed a city, not a town, and our life there was a permission with all expenses paid. Here it was that we made our home until August 24, patronizing the pâtisseries, the cinéma, and the hotel, holding dinner parties at will and writing distress calls to our Paris banks. Here, too, we accumulated a whole new set of Fiats, put them in good shape, and then sat on the front seats awaiting developments.

The developments developed on August 24 and we rolled off in convoy again, by way of Contrexéville and Neufchâteau, to Bar-le-Duc, where we expected to receive orders to go into action. But again we were disappointed.

Condé-en-Barrois was our next home, where we were at last attached to a division, and for two weeks we carried malades into Bar-le-Duc, watched "Fritz," from our barracks, bomb the city, and asked the Frenchmen when they would leave.

September 12 was a big day in the history of the "Flying Sixty-Fourth," and we were all happy as we dusted along the famous Bar-le-Duc-Verdun road in the direction of Verdun. This was the first time we had ever had a definite objective.

Until the first of October we made up for the time we had lost in the past. We knew shells and shell-holes, we knew dark nights, we knew pursuing avions with active machine guns, and we knew days and days of hard action.

From Verdun we went back for a week's repos and recuperation at Vanault-les-Dames. Then we moved to the Les Éparges sector, where we waited for another Section to relieve us. On October 24 the relief came and we retired to Bar-le-Duc, where a banquet celebrated the last night of the Section, and the boys separated to seek other fields. After it was all over, there was not a man in the Section who regretted these five months in the Ambulance Service, for though our seemingly endless repos was harder than work, we saw some of the beautiful parts of France, and we had done at least a little to help the cause.

RICHARD WILBUR WESTWOOD*
*Of Newton, Massachusetts; Columbia,'19; member of Sections Sixty-Four and Four of the American Field Service; subsequently in the U.S.A. Ambulance Service in France.